Here at OpenAgent, we know the importance of up-to-date market insights. As Australia’s largest real estate comparison and referral platform, we speak to thousands of homeowners on the hunt for the right real estate agent to sell their home.

We’re in a unique position to capture the market perspectives of sellers, one of the most important groups in the real estate ecosystem. We hope you enjoy this report, and we look forward to delivering many unique insights in the quarters to come.

For Q2 2019, seller sentiment across Australia has grown by a significant amount. Figures at the beginning of April saw a slight increase from March to +0.7. In May, it surged to +2.0 before reaching last month’s value of +3.6, the highest national index since March 2018.

The upward trend is likely due to a range of different factors. For instance, the election results in May confirmed that investors no longer had to worry about a change in negative gearing or capital gains tax policies. There have also been lowered interest rates, looser credit lending restrictions and increased clearance rates over the past quarter.

State consumer sentiment all back to positive indexes

NSW sentiment back to same index as beginning of 2018

Sentiment in NSW went from the record low of -0.9 in March to +3.6 in June. This is the highest it’s been since March of 2018. At the beginning of the quarter, consumer sentiment was still in the negatives at -0.3. Once May hit however, the index increased to +1.5.

What inspired this increase? It seems that vendors in NSW no longer believe prices are on the decline. The majority now believe that prices will increase by the end of the year. In fact, CoreLogic’s home value index recently reported that Sydney has shown its first positive increase in home value since July 2017. In March, only 22% of NSW home sellers believed prices would go up compared to 58% in June.

VIC property prices increasing again since its peak in November 2017

Victorian sentiment shows a similar story to NSW with values bouncing back from +0.8 at the end of March to +3.6 in June. The index actually fell to -0.4 in April before jumping to +2.4 in May.

Similarly to Sydney, Melbourne showed its first positive increase in CoreLogic’s home value index since November 2017. In March, 37% of Victorian vendors believed home prices would increase within the next six months compared to 60% in June.

Compared to other states across Australia, the sentiment in Queensland has remained relatively stable for the past few quarters. The June index sits at +3.9, the second-highest in the nation after SA.

WA sentiment lowest in Australia but still climbing up

Consumer sentiment in WA tends to fluctuate a fair amount in comparison to the other states. At the end of June, the index was +2.8, a large jump from -1.2 in March. There was a leap in April where the index rose to +0.9 before reaching +2.1 in May.

Despite these increases, the sentiment in WA is actually the lowest compared to the other states. This could be attributed to the fundamental problems in WA’s housing market due to low population growth and oversupply in the outer suburbs. 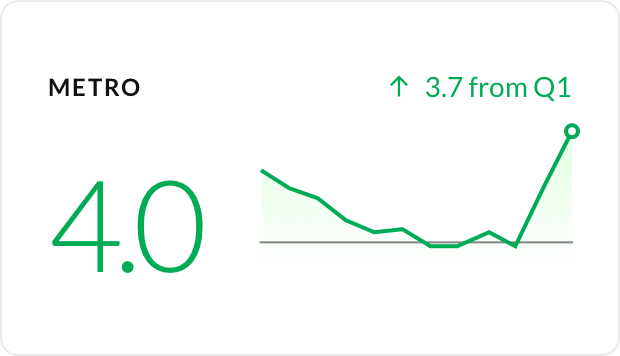 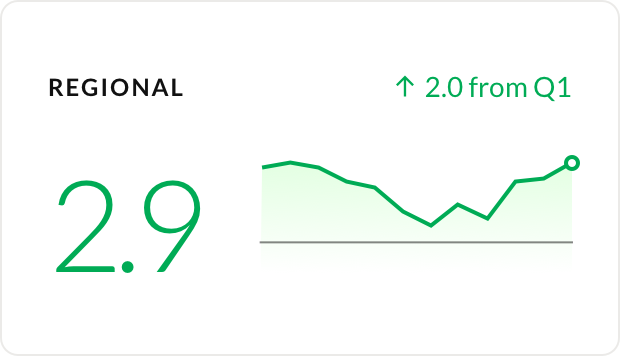 In Q2 2019, seller sentiment in metro regions across the country initially saw a drop from +0.3 in March to -0.1 in April. However, this quickly turned around in May, increasing to +1.9 and then to +4.0 in June. Metro sentiment has returned to being higher than regional sentiment.

Regional sellers have recently been more optimistic than metro sellers. However, it now sits at around +2.9. Areas such as the broader outback regions of Queensland, Western Australia and South Australia have recorded worse housing market conditions due to extreme weather conditions.

Capital cities have bounced back from last quarter

There has been a whopping increase in seller confidence across all capital cities in Australia. In particular, the optimism in Sydney and Melbourne can potentially be explained by the Coalition win, especially with the large percentage of investors in these cities. Sydney and Melbourne have indexes of +0.9 and +1.3, respectively, despite having negative sentiments last quarter.

In particular, the optimism in Sydney and Melbourne can potentially be explained by the Coalition win, especially with the large percentage of investors in these cities 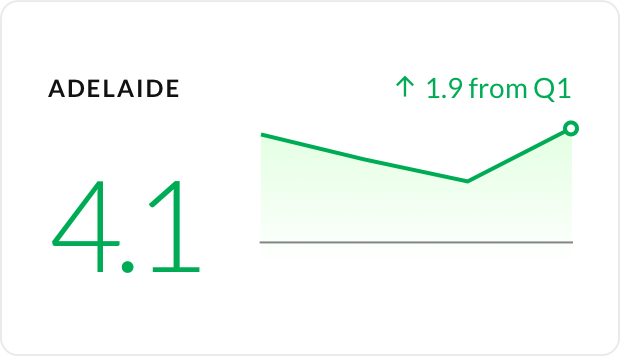 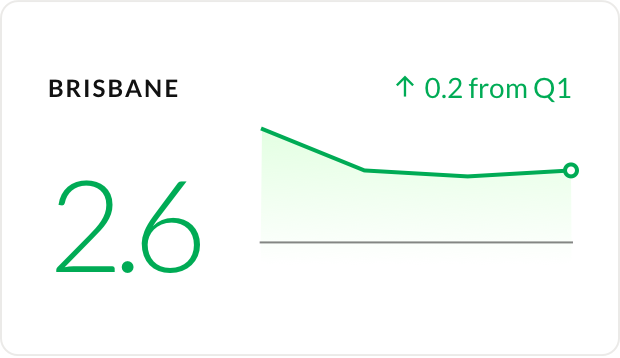 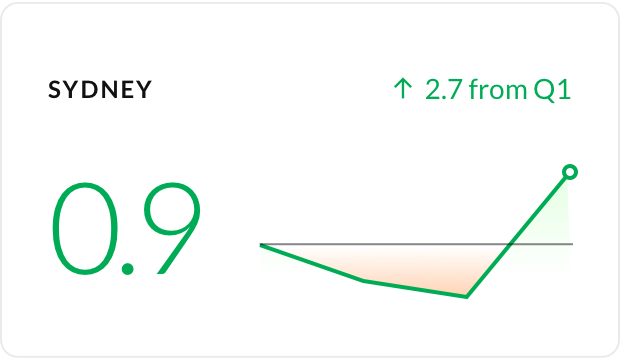 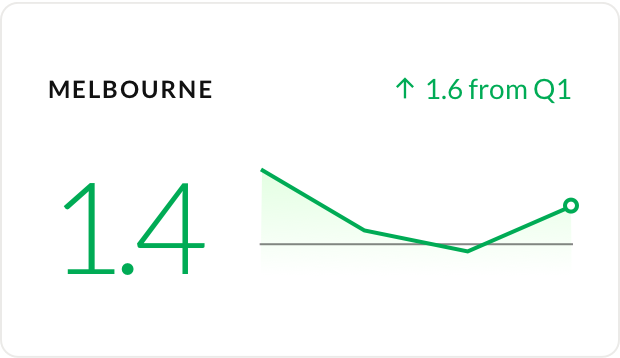 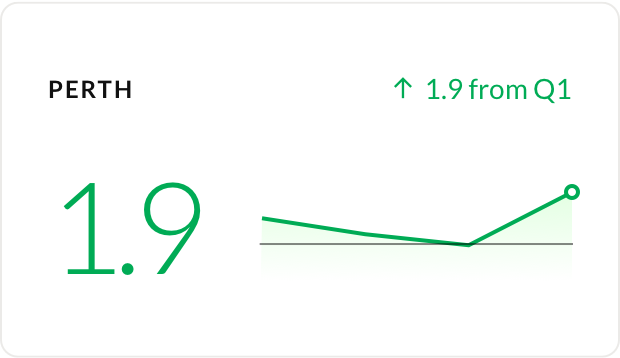 Adelaide also saw a large index increase from +2.2 in Q1 2019 to +4.1 in Q2 2019. This makes Adelaide the capital city with the highest sentiment this quarter compared to the other capital cities. Brisbane’s index is also performing well, standing at an average of around +2.6 in the second quarter of the year. However, this isn’t too much of a change from the previous quarter.

Owner-occupier sentiment back to being more positive than investor sentiment 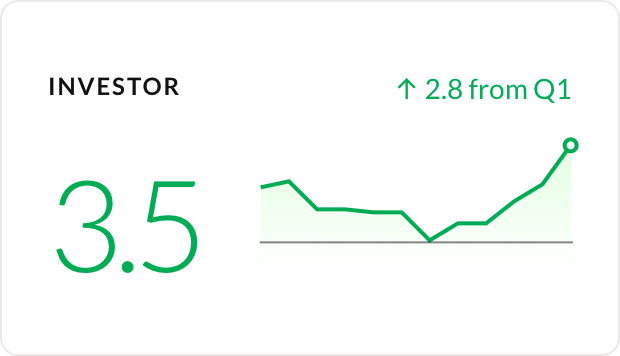 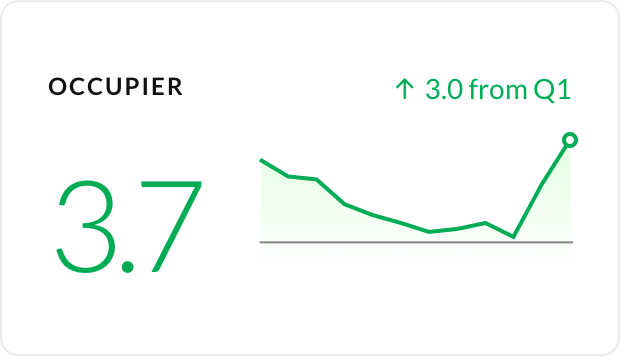 Investor sentiment recorded an all-time low in the first quarter of the year. However, it has come back up to +3.5 in June. As mentioned before, this is likely due to the Coalition winning the election in May, APRA loosening lending restrictions in the same month, and RBA cutting the official interest rates in June. 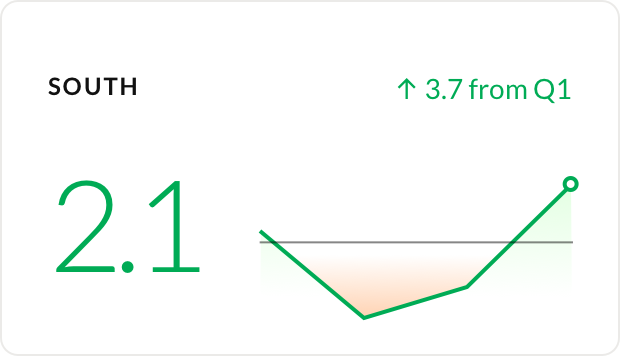 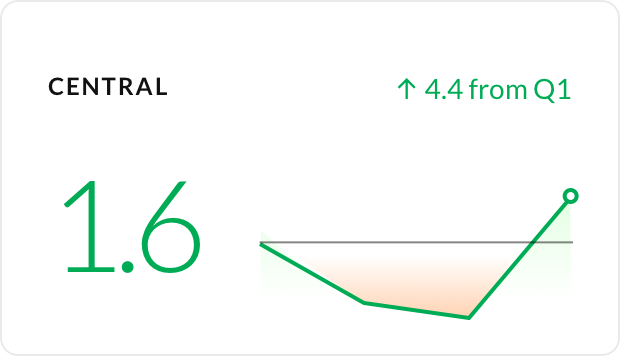 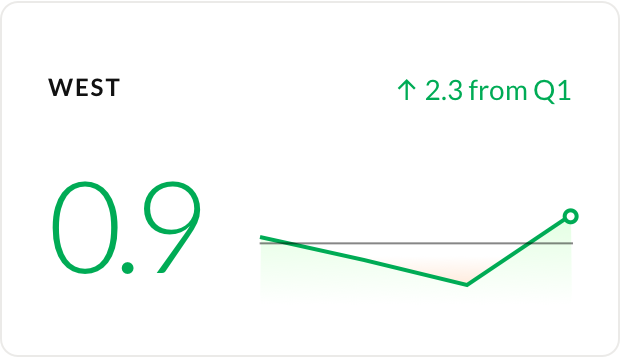 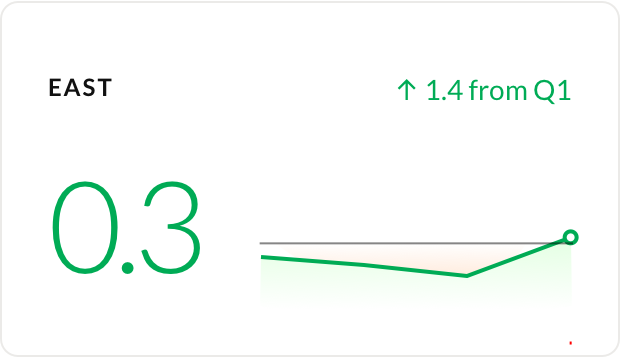 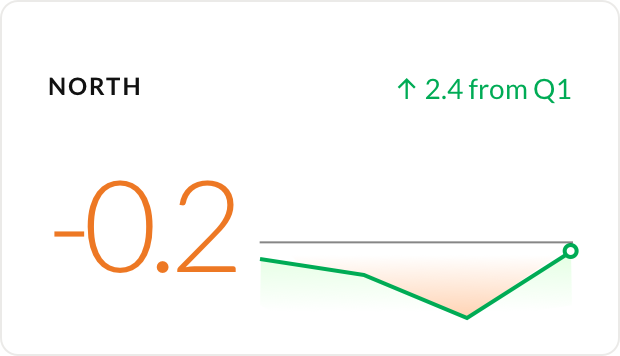 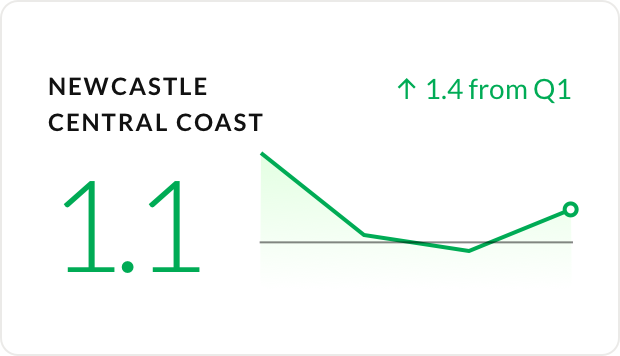 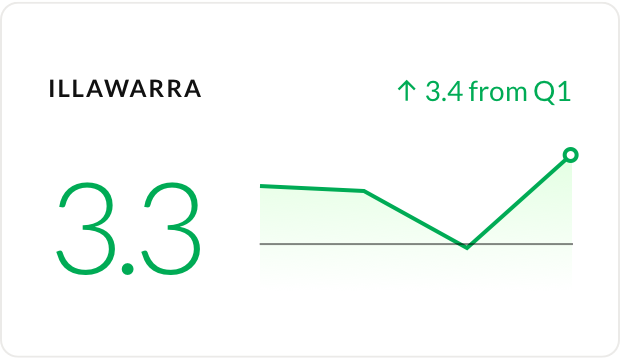 Our index takes a more in-depth look into Sydney, Greater Sydney and its surrounding regions of the Illawarra and the Central Coast/Newcastle.

After selling sentiment dropping across all Sydney regions in Q1 2019, Q2 2019 is looking more hopeful with the indexes on the rise. The only region that hasn’t returned to a positive sentiment is in North Sydney where the index is -0.2.

The biggest jump in sentiment has been in Central Sydney. At the beginning of the year, vendor sentiment was sitting at around -2.8. However, it has risen to +1.6 this past quarter.

East Sydney and West Sydney have index values hovering around 0 to +1.0. This indicates that home sellers are more cautious, believing that property prices will either stay the same or only increase marginally in the next six months.

How does the Consumer Sentiment Index work?

To build the Consumer Sentiment Index, we ask our vendors the following question:

Where do you expect home prices to be in your area in six months’ time?

Vendors then rank their answer on a 5 tier scale, ranging from Strongly Up, Slightly Up, About The Same, Slightly Down and Strongly Down.

"To build the Consumer Sentiment Index, we ask our vendors the following question: Where do you expect home prices to be in your area is six months' time?"

This information is then collated to provide the basis for our proprietary index system. The index gives a measure of vendors’ expectations for home price movement on a scale of -10 to +10, with a reading of 0 being a neutral view of the market.

In 2019 Q2, we collected a total of 3,319 survey responses from OpenAgent customers all across Australia. All of our responses have been weighed against the relevant cohorts at the state level to remove any bias and present a realistic snapshot of sentiment for that group.

Using this methodology, we ensure that the Consumer Sentiment Index is relevant for all vendors, not just OpenAgent’s customers.

This regular report includes home price sentiment at a National, State and Metro level, as well as granular information about why people are selling, and what they see as the key factors driving their local markets.

In November 2016, we started compiling anonymised data that captures the sentiment and market expectations of consumers who are actively looking to sell their property.

The latest instalment of this report, covering sentiment from April 2019 until the end of June 2019, shows some fascinating developing trends in sentiment across Australia, based on a total of over 38,897 responses across 32 months.