The role an auctioneer plays in selling your home 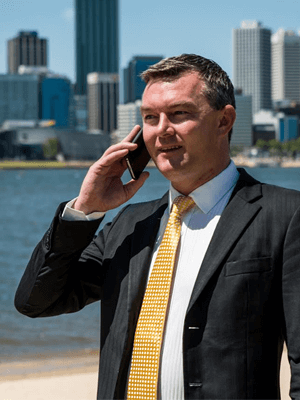 The auctioneer has a duty of care to each and every seller. Unlike selling properties for a fixed price, the auctioneer needs to go above and beyond the reserve price. However it’s not as simple as just knowing the market and when to sell. Those extra dollars and the outcome of the day all depends on the auctioneer’s tactics and those fast few minutes.

Brent Compton is a licensed Real Estate agent and auctioneer at Ray White in Perth. He has 14 years of experience and has sold over 240 properties in auctions. With a 97 percent success rate, he is the go-to man when it comes to selling at auctions.

Compton believes that an auctioneer’s personality is the secret ingredient in selling homes well above reserve price. “An auctioneer needs to stand his ground and conduct a professional, yet entertaining auction.”

“I love having a bit of fun. I tell a few jokes and try to keep it as humorous as possible and let people know I'm down to earth. I'm on their side and try to make it as painless as possible.”

Apart from the entertainment and personal side of selling houses, at the end of the day the result come down to dollars and cents. This is where an auctioneer needs to be firm on the bids. Compton says they need to have a plan in place.

“For whatever the reserve is, an auctioneer needs to have in Plan A, B and C on how to get there for the seller.”

Before the property doors open and the bidding wars begin there is a lot that goes on behind the scenes. For a property that has the potential to draw in many buyers, Compton says the lead up to auction is shorter. A 28 day campaign would be adequate time to reel in potential buyers. For a property that Compton predicts will have fewer buyers a six week campaign helps to build excitement.

However there’s actually no real secret to drawing those big buyers in. Compton still uses traditional methods of marketing like advertising through newspapers, email database, internet sites, and even letterbox drops.

“Real estate is not going to dramatically change any time soon. You've got to market the property correctly, it has to be presented nicely and people will come,” said Compton.

Auctions have high energy and if all goes to plan they produce a champagne popping experience. Compton says that selling with fixed prices is a bit like a merry-go-round, however selling at an auction is like a rollercoaster.

“It's a lot more energy and agents that are auctioneers seem to be a little bit more exciting people I think, and there's a lot more to it.”

Compton believes auctions get a bad name because they are handled by people that don’t truly understand the game.

“I've seen some great auction agents, I've seen some bad ones. It's a bit like baking a cake, some people get the cake to rise and make it taste nice. Then there are some people who make a little pile of crap in the oven that doesn't look any good and you don't want to bring it out.”

Read more about how a property auction works by clicking here.